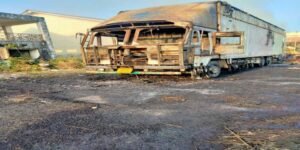 Kokrajhar(Assam),March 11: Once again a Ganja smuggler sustained bullet injuries in a police encounter on Friday   at Srirampur under  Kokrajhar district.

According to police, acting on a source information on Thursday at about 6 pm at Srirampur a vehicle no-HR 38 U 1778 was intercepted and checked and found 10 packeds of Ganja weighing about 105 kgs which was kept concealed in between the other goods (broom) which was loaded at Kharupetia, Mangaldoi of Darrang district and supposed to be delivered in Gorakhpur Uttar Pradesh and the driver of the vehicle, identified as Aarif Khan of Bijapur Faridabad, Haryana was apprehended.

During further interrogation accused person revealed that there are other persons involved with him who are hailing from Gossaigaon area.

In order to apprehend those persons he was taken out for searching those involved persons. When the police party reached in the outskirts of Dologaon he suddenly snatched the service pistol of the Incharge of Shreerampur P.S and tried to fire at the police party.

Sensing immediate danger to the police party, the other officer immediately fired upon the accused below belt line and bullet hit his left leg near calf and he was immediately recaptured and sent to Kokrajhar Rup Nath Brahma (RNB) civil hospital for better treatment.

However in the meantime some miscreants set on fire the truck for hampering and tempering the evidence.
“Police has initiated strict steps against the Ganja smugglers across the district and were able to apprehend and recovered the Ganja from the vehicle”, a senior police officer said.