Life-size statues of U Tirot Sing Syiem, U Kiang Nangbah and Pa Togan N Sangma to be installed 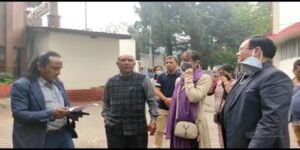 Shillong ( Meghalaya), April 21 : The Patriotic Monument of Meghalaya is going to be transformed into an aesthetic delight with the incorporation of the gigantic figures of the three freedom fighters, U Tirot Sing Syiem, U Kiang Nangbah and Pa Togan N Sangma at the premises of the Arts and Culture Department at State Central Library.

The join inspection was undertaken by Sanbor Shullai, Minister, Arts and Culture in the presence of Frederick R Kharkongor, Commissioner and Secretary, Arts and Culture and Ms. W A M Booth, Director of Atrts and Culture, Government of Meghalaya including Raphael Warjri, Chief Creative Director of Riti Academy of Visual Arts who will be executing the project.

The existing towering pyramid will be enhanced with the incorporation of the three significant figures of freedom fighters and supplemented the structure with a dynamic figurative, the proper platform for laying of wreaths and the overall visual impact of the area. The aspiration of the citizens of the State will be fulfilled with the innovation and the Minister is responding to the public anxiety and the suggestions made by some youth organisations.
Shullai said ‘Some local organisations have mooted the idea of a figurative image of freedom fighters of Meghlaya on the lines of other monuments of national figures like that of Indira Gandhi and Netaji Subhash Chandra Bose’.

The new monument will boost the morale of the youth and inspire the allegiance for the State and the country on the auspicious period of the fiftieth anniversary of Statehood of Meghalaya and the Seventy Fifth anniversary of national freedom struggle, Azadi Ki Amrit Mahotsav.

Shullai also informed that eminent artist, Raphael Warjri will execute the artworks through an art society, Riti Academy, ‘It is a positive gesture to promote local talents also and Bah Raphael has proven his mettle with the artistic mural at the prominent location of the city’. Further, he said ‘The first phase of the project is at Rupees Thirty Lakhs, and the subsequent phases are being formulated by the department’. It is expected that the first phase will be completed within three months.

State Mourning from April 21 to April 23

State Mourning from April 21 to April 23