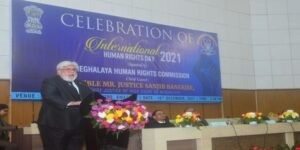 Chief Justice of High Court of Meghalaya, Justice Sanjib Banerjee graced the occasion as the Chief Guest.
The programme was organized by the Meghalaya Human Right Commission on the theme “Equality – Reducing Inequalities, Advancing Human Rights”

Justice Sanjib Banerjee stressed on the need to protect the diversity within the homogeneous identity of India. Lamenting the caste system and suppression of women which are realities to this day, he said that these are an inheritance of a post colonial feudal culture which we cannot be proud of. Coming down heavily on the VIP culture which separates those in power from the common man, in terms of the way they conduct themselves and the extent of privileges they enjoy, he said that it is futile to demolish mass structure only to feed the VIP culture of the uber cast of those in authority.

While India boasts of many modern amenities, hunger, poverty, lack of shelter and health care have not been addressed adequately, he said. Adding that Human Right are centered to the very notion of peace and development, Justice Sanjib Banerjee said that promotion of political rights alone will not lead to full enjoyment of human rights; economic, social, and cultural rights are equally important. The Judiciary also has a crucial role to play In safeguarding the individual’s right to dignity, he reiterated.

The street plays were presented by the students of Social Work Department, St. Edmund’s College, and Institute of Integrated Professional Studies (IIPS).