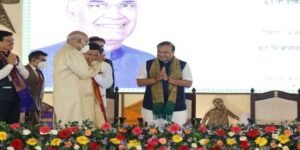 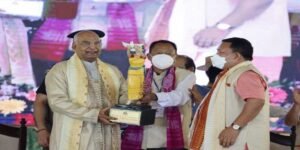 The President noted that the month of May is very important for the Bodo people as they remember Bodofa Upendra Nath Brahma on May 1 which is his death anniversary. He said that Bodofa had spread the message of “live and let live”. His message of maintaining harmony with all communities while conscious of Bodo self-pride will be forever relevant.

The President appreciated Bodo Sahitya Sabha for making invaluable contribution for past 70 years in strengthening the Bodo language, literature and culture. He said that the Founder-President of the Bodo Sahitya Sabha, Joy Bhadra Hagzer and General Secretary Sonaram Thosen had made commendable efforts in recognition of Bodo language. This Sabha has also played important role in use of Bodo language as the medium of school education and place in the higher education.

The President noted that so far 17 writers have been awarded Sahitya Akademi Awards for their works in Bodo language. And out of that 10 have been awarded for poetry work. This shows the natural inclination towards poetry among Bodo writers. He was happy to note that many women are writing in different genres of Bodo literature. But it has also been observed that only two women are among senior writers who have received the Sahitya Akademi Award for original works, he said. He urged ‘Bodo Sahitya Sabha’ to encourage women writers. He said that to keep any literature alive and relevant, the participation of the younger generation is very important. Therefore, special encouragement should also be given to young writers by Bodo Sahitya Sabha.

The President was happy to note that the works of other languages are being translated into Bodo language with great enthusiasm. He said that it is the characteristic of any vibrant literary community. He expressed confidence that such translated literature would give an opportunity to the readers of Bodo language to get acquainted with other Indian languages as well as world literature.

The President said that the conservation and promotion of local languages is the responsibility of the society and the government. He appealed the Government of Assam to make efforts to promote Bodo language.
Meghalaya chief minister Conrad Sangma while attending the conference, said that he was impressed and happy for getting an opportunity to be part of the Bodo Sahitya Sabha conference in Tamulpur.

” I am very much impressed with the grand celebration. Languages must be preserved and uplifted for development among the communities. All local language, traditional languages should  be protected with integrity”, Sangma said.

Chief Minister of Assam, Dr Himanta Biswa Sarma said that the state government is committed to extend support and cooperation for the welfare and development of the Bodo language and literature in days to come.

BTR CEM Pramod Boro thanked the President and First Lady Savita Kovind , on behalf of the people of BTR for gracing the concluding day of the 61st Annual Conference of Bodo Sahitya Sabha at Tamulpur today.

Consultation with Health and Urban Management sectors in Shillong held