Meghalaya in collaboration with SIAL, world’s No. 1 Food Innovation Network had organised the first event in the State in 2019 and this is the second edition of the mega food exhibition show, where buyers and sellers from different parts of the region and South East Asian nations are participating

Chief Minister Conrad K. Sangma said, “Northeast Food Show has given a platform for the entrepreneurs and farmers of the State and the Northeast access to international markets.”

Meghalaya in collaboration with SIAL, world’s No. 1 Food Innovation Network had organised the first event in the State in 2019 and this is the second edition of the mega food exhibition show, where buyers and sellers from different parts of the region and South East Asian nations are participating.

“This Northeast Food show is a great platform to bring different stakeholders together and increase the value of agri-horti products,” he added. 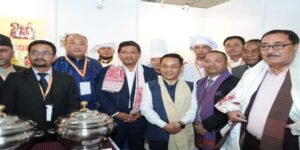 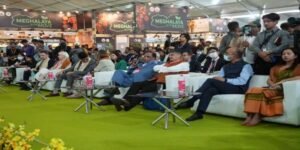 He further said that the event is not only a food show but a platform where entrepreneurs, farmers, cooperative societies and Self Help Groups can grow exponentially. “This show is a culmination of all the activities and processes in farming, production, packaging and entrepreneurship so that value is added to the final product to be able to compete with the best in the world,” he said.

He also informed that it is a North East show because the international market looks at variety and scale which Meghalaya alone might not be able to produce for a buyer. “We are trying to expand and reach out to the South East Asian countries as well,” the Chief Minister said.

Terming Vietnam as ‘shining example’ in the food processing sector globally, Chief Minister said that the Northeast as a region together can become a global platform and work together to market the products.
“The way the Vietnam government, the country and the people of Vietnam have transformed and become an enterprising nation, a nation driven by entrepreneurs, where the government plays the role of policymaker. I think Vietnam is one country which I have deep respect for, and I feel we can learn a lot from them,” he said.

CM Sangma said that Meghalaya will continue to host the Northeast Food Show and will ensure that the event becomes better and bigger in the years to come. “We want to make it better as we go along but whatever we have achieved is very satisfactory and I am happy to see the difference that we have made in people’s lives today,” he added.

He also expressed his gratitude to the ambassador of Vietnam Pham Sanh Chau, who is attending the programme. In 2019, food and beverage manufacturing contributed 17 billion US dollars to the GDP of Vietnam, and provided employment to 3 million people.

Sikkim Chief Minister Prem Singh Tamang lauded Chief Minister Conrad K. Sangma for conceptualising such an event that promotes farmers and agripreneurs and entrepreneurs from across the region. He said that the event will go a long way in promoting the agri-horti products of Northeast.

Sikkim is a participating State in the Northeast Food Show.

“Northeast is blessed with rich agro diversity. Through this show, different States of the region will be able to share their agriculture experience and collaborate for the progress of our great nation,” Tamang said.

He also lauded efforts of the Government of India under the leadership of Prime Minister Narendra Modi for the thrust for the progress and development of the Northeastern region.