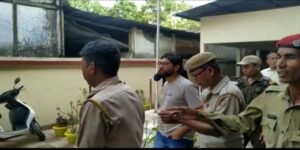 Kokrajhar ( Assam) , April 25 : Arrested Gujrat Congress MLA Jignesh Mevani was granted bail on Monday at CJM court in Kokrajhar after staying for a night at district jail in Kokrajhar.

A new FIR was lodged with Barpeta police station bearing no.81/2022 against MLA Mevani.

He was brought to the Barpeta police station from Kokrajhar after getting bail from , under section 294/323/353/354 IPC.

After a court in Kokrajhar district granted bail to Gujarat Independent MLA Jignesh Mevani in a case over a tweet by him on Prime Minister Narendra Modi on Monday, he was rearrested on charges of “assaulting and outraging” the modesty of a woman police officer four days ago.

Mevani, an MLA supported by the Congress, was booked under IPC sections related to voluntarily causing hurt, assault or criminal force to deter public servant from discharge of his or her duty after a policewoman filed a complaint against him, police said.

The alleged incident occurred when she was escorting the Dalit leader from Guwahati airport to Kokrajhar along with Additional Superintendent of Police Surjeet Singh Panesar and another police official in a government vehicle on April 21, according to the FIR registered on the same day in Barpeta Road police station.

Mevani’s lawyer Angshuman Bora told PTI that the allegations against Mevani were “atrocious” and there was no mention of the Barpeta case when he was in police custody for three days or at the time his bail plea was being argued in the Kokrajhar court earlier in the day.

Suddenly, after he was granted bail, he was shown as rearrested, Bora said.

Kokrajhar First Class Judicial Magistrate Bhavna Kakoty granted him bail on furnishing a bond of Rs 30,000 with two sureties in connection with the case related to his tweet against the prime minister.

The court also directed him not to directly or indirectly make any inducement, public threat or promise to any person acquainted with the case. He was also asked not to leave the station without prior permission from the court.

While being taken away in a van from Kokrajhar to Barpeta district, Mevani alleged that this is a “conspiracy on the part of the BJP and the RSS to tarnish my image and systematically destroy me”. Both Assam and Gujarat, from where he hailed, are BJP-ruled states.

“They (BJP and RSS) did it with Rohit Vemula, Chandrasekhar Azad and now they are targeting me. They have serious problems with Dalits. We believe in the Indian Constitution. Dr Babasaheb Ambedkar was targeted by Savarkar and Modi is targeting Jignesh Mevani,” he told reporters.

In her FIR, the woman police official alleged that the Gujarat MLA used abusive words inside the vehicle at around 1:30 pm at Simlaguri in Barpeta district.

She claimed that when she asked him to behave, he became very “agitated and used more slang words, tried to frighten me and pushed me on my seat with force. He thus assaulted me during the execution of my duty as a public servant and outraged my modesty by touching me inappropriately while pushing”.

“We are absolutely surprised. There was not a whisper about the assault on officials when he was under police custody for three days.

“Suddenly after he was granted bail, he was shown as rearrested under IPC Sections 294 (uttering obscene words in public), 323 (voluntarily causing hurt), 353 (assaulting a public servant in the execution of duty) and 354 (using criminal force to a woman intending to outrage her modesty),” Mevani’s lawyer said.

Bora said that they will move for his bail in Barpeta Court on Tuesday. Mevani was arrested on April 19 from Palanpur town in Gujarat after an FIR was registered against him in Kokrajhar for his tweet on the prime minister. He was brought here two days later on transit remand.

According to the FIR that led to Mevani’s arrest from Gujarat, he had purportedly written a tweet, claiming that Prime Minister Narendra Modi “considered Godse as God”.

The independent MLA from Vadgam seat in Banaskantha, who has pledged his support to the Congress, had used the same tweet to also urge Modi to appeal for communal harmony during his visit to the Gujarat, the FIR at Kokrajhar Police Station, which was accessed by PTI, said.

The Kokrajhar court had remanded him to three days of police custody which ended on Sunday after which he was sent to one day’s judicial remand with the directive that he would be produced before the court for hearing of the bail application.

MLA Mevani said that the BJP and RSS have been trying to destroy him by tarnishing his image . ‘They want to destroy me as they are systematically targeting me’, Mevani said.