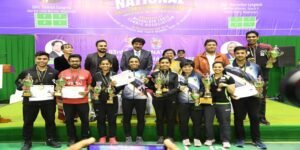 Speaking at the 83rd National Table Tennis finale, the Chief Minister expressed his condolence to the family of Late Vishwa Deenadayalan, promising national paddler, who died in a tragic road accident on his way to Shillong to participate in the games.

Expressing his thanks to the organizers of the 83rd National Table Tennis Championships in the capital city of Shillong the Chief Minister highlighted the importance of Sports in the life of youngsters. “For policy makers, Sports is more than just a game as we have to direct and channelize the energies of the youth. We understand that Sports play a very important role in character building,” he said.

The values of hard work, team work, Sportsmanship are the values which are inherently shaped by Sports, he added.

“I truly believe that whenever there is an opportunity to provide a platform for youngsters to grow into the areas of Sports that they have passion for we must ensure that every step is taken to give them the push,” he said.

The Chief Minister also expressed happiness that the National Table Tennis Championships was held in the year when the State is celebrating its Golden Jubilee.

“We have many more programmes chalked out to celebrate the Golden Jubilee of the State and these programmes will not just mark the 50th Year celebrations but provide a platform for the youth to showcase and promote their talents in the Sports, Music or Arts,” he added.

The Chief Minister later distributed the awards to the winners of the Men’s Singles. The winners in this category were 1st Achanta Sharath Kamal, 2nd Sathiyan Gnanasekaran and 3rd Shah Manush and Shetty Sanil Shankar.