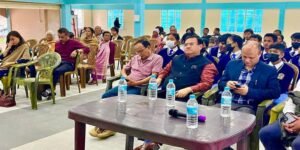 Shillong ( Meghalaya), Oct 7 : As part of the forthcoming Special Summary Revision (SSR) and in connection with preparatory activities for the forthcoming Assembly Elections, the Office of the Chief Electoral Officer in collaboration with the office of the Deputy Commissioner, East Khasi Hills, kick started its ‘Electoral Outreach Programme’, to engage with the community leadership in creating electoral awareness and push enrolment drive among the citizens who have reached the voter’s age, especially in pockets where the enrolment gap imore than 20%, as a result of urban apathy. 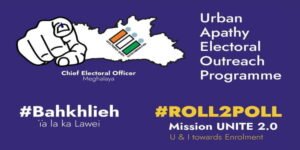 With the prevailing urban voters’ apathy in some areas, becoming an issue of concern, this series of community outreach campaigns is set to address challenges, and chalk out ways and means & strategies to enroll the eligible citizens in low enrolment pockets.

The official launch commenced today at Umpling. The electoral outreach is expected to travel to other urban townships like Tura and Jowai. 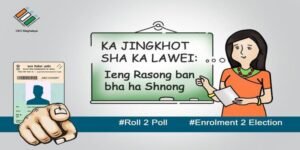 Entitled #RollToPoll ‘Mission Unite 2.0’ the first outreach event was held at Umpling Dongrum in the presence of young people, members of the Seng Kynthei, members of the Seng Samla and the elderly and other stakeholders. Chief Electoral Officer, Frederick R. Kharkongor was present to personally communicate to the various stakeholders within the community on the importance of enrolling and polling. He also spelt out the theme for this year’s campaign ‘Roll to Poll’ and stressed on the mandate of the Election Commission of India to make sure that ‘No Voter is left behind’, including persons with disabilities (PwD). 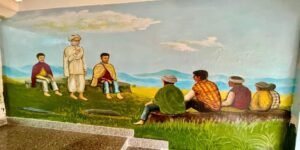 Present in the event, were the Rangbah Shnong, Sawwat F. Pyngrope, the Secretary Shnong Umpling and members of the executive committee, with officials from the CEO’s office and the East Khasi Hills DC office.

CEO ,Frederick R Kharkongor in his summation speech underscored that, “The fact that we are here today, is to tell the world that each and every vote and voter is important. Voting is not only someone’s right, but it is someone’s might as well. Besides, voting is a citizen’s voice and citizen’s choice”.
The Rangbah Shnong, Pyngrope, in his speech expressed willingness to collaborate with the CEO’s office and the DC office, “We will work together with the Chief Electoral Officer and the Booth Level Officer to find out the gaps and plug those gaps”, he said.

The event also had a very constructive interactive session, where questions were raised on enrolment and information in case of deletion due to deaths. The interaction delved into Aadhaar linkages and how this process should work on a voluntary-mode. The role of the BLOs was also highlighted.

In response to a query on the status of citizens who have reached a voter’s age not taking interest in enrolment, the floor discussed and concluded, that solution lies in collective participation of community leaders, family members and peers, and all stakeholders.

The next series of Electoral Outreach programme will continue over the next few weeks leading to the Special Summary Revision with an objective to bridge the high enrolment gap in the identified pockets where voters apathy ,in respect of enrolment is high.