In Pics : Rain and hailstones slow down traffic in Shillong 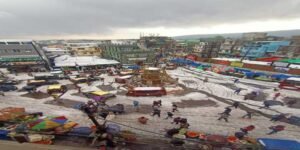 The temperature dropped from 14 C to 8 C in minutes as as the hill station turned white.

The streets of the northeastern city were covered with a thick sheet of snow, causing a bit of traffic trouble in the region. 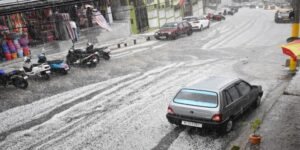 It was a normal wintry day  today until around noon when dark clouds began hovering over the city   followed by  rains.

But no sooner did the people hear the pitter and patter of rain drops than the hailstones began dropping on different parts of the city.

The air in Shillong city became chillier by afternoon .The temperature dropped from 14 C to 8 C in minutes as as the hill station turned white.

Social media was flooded with pictures and videos of hailstones, while some terming it as snowfall in Shillong.

Tin roofs, roads, and fields across the city were covered with pebble-sized hailstones.