Tura(Meghalaya), Feb 28: Due to mounting pressure from the GSU, FKJGP, AYWO, ADE, FAF, AHAM for the past few weeks , the CEM of Garo Hills Autonomous District Council ( GHADC), Rakesh A Sangma finally resigned on Sunday night.

The resignation letter was handed over to GHADC Deputy Chairman Albinush Marak to forward the same to the governor through his office. 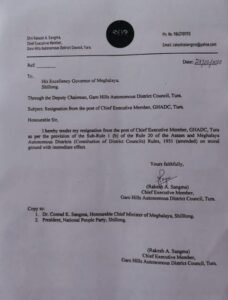 The deputy chairman Albinush Marak who accepted Rakesh Sangma’s resignation has been nominated to be the new CEM in view of widespread protest in Garo Hills against the present CEM Rakesh Sangma.

Meanwhile ,GHADC Deputy Chairman Albinush Marak also resigned on Monday to pave his way to be the next CEM .

As a mark of celebration of their demands being met, the  NGOs today took out a victory  rally that travelled across the town of Tura. Around 3000 people, including women, senior citizens, youths and NGO members, took part in the rally .