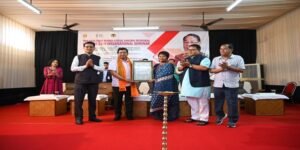 “(L) P.A. Sangma as a person has left behind a legacy for generations. For me as a person, he was more than a father. He was a simple person but always stood for the rights of our people. He has always voiced his concerns for the people of the region. He has motivated many youngsters like me during his peak in politics,” the chief minister said, while elaborating on the Late Sangma’s persona and a man who always stood for the voiceless and the marginalised.

Talking about Late Sangma’s struggle as a child, he motivated the young audience in the gathering by detailing on his early life.

“My late father had a hard life as a child. Nothing came easy to him. He was adopted by the missionaries, where he used to clean plates, clean rooms and cook food. The missionaries taught him the lesson of life. As a person I understand that he struggled in life and took up the challenge to march ahead,” he said.

“We have to learn to adapt to different situations. If we closely study PA Sangma’s life, we can understand that he responded differently to the situations that came his way. No matter what challenges came ahead in his life, he was ready for all of them,” he added.

Talking about struggle and success, he said, “It is important to learn and adapt to those situations and look at positively by accepting success or failure”.

2 killed, dwellings washed away due to heavy rainfall in Meghalaya