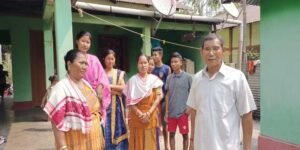 Kokrajhar ( Assam) ,March 21: Family members of ace footballer Halicharan Narzary have expressed their happiness and excitement after his scintillating performance during the finals of ISL-2022 held on Sunday evening where Hyderabad FC beat Kerala Blasters FC 3-1.

Narzary is popular across the country for his classic performance at various levels .

Villagers and family members of Halicharan while expressing their happiness over his excellent performance at the finals which ultimately led Hyderabad FC to win the ISL finals against Kerala Blasters FC.

People cutting across communities in the northeastern region including Bodoland Territorial Region as well as Assam witnessed the final match on Sunday evening and appreciated and enjoyed the performance of Narzary in the  football ground .

Football lover and a senior citizen from Narzary’s Batabari village,Jhanoky Prasad Basumatary said that the villagers are really proud of him as he has been dominating the ISL with his classic performance .He was also hopeful that Halicharan would definitely get the opportunity in international events like world cup as well Olympics if he can continues to play football with the fighting spirit .

” We are very proud of him this footballer who hails from a remote village in Kokrajhar district”, Basumatary added .

Mother of footballer Halicharan, Lakhi Narzary and other family members are also overwhelmed with his excellent performance.

” Being the mother of Halicharan, I am very happy as my son could score the winning goal in the final match”,Lakhi Narzary said.

Bodoland Territorial Region chief executive member (CEM) Pramod Boro while extending his best wishes to footballer Halicharan Narzary said that this is a great laurel achieved from Bodoland region as footballer created a record of sorts by scoring a goal in the final match.

” We are very proud of our extremely talented footballer from BTR, Halicharan Narzary who scored a winning penalty for Hyderabad FC in the ISL( Indian Super League) final against Kerala Blasters FC on Sunday evening. Congratulations! Your achievements are motivation to many passionate footballers in the region”, Boro added.

MCA U-23 Boys Cricket Tourney: SCA (A) squeeze past Ri-Bhoi for place in final