Kokrajhar (Assam) , Jan 24 : Beautiful Champa Boro ,a master degree holder in Bodo language and a native of Tamalpur tied knot with Maneswar Daimary ,a dwarf and former adviser of All Bodo Students Union ( ABSU) on Monday at his Khargaon residence in Kokrajhar .

The bridegroom ,Daimary was associated with ABSU for the past 22 years and was closely involved with Bodoland movement. He is well known among the Bodo society for active participation in the student’s welfare activities .
The bride, Champa Boro has completed her Master degree in Bodo(MIL) and hails from Tamulpur area of Baksa district. 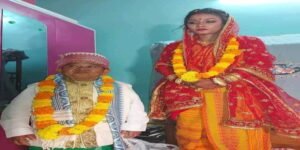 Their marriage has become a cynosure for all eyes.

Dr Sarma extended his best wishes to the newly wed couple and wished them a happy married life. 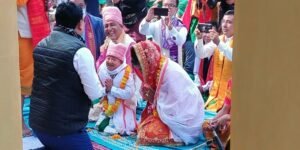 The bridegroom , Maneswar Daimary expressed his gratitude to the chief minister Dr Sarma and BTR CEM Pramod Boro for extending all support for the grand wedding.

An invitee who did not want to be identified said the curse of size still exists in our society. For someone who is a dwarf, it’s a cruel world to live in. Many suffer from dwarfism but what hurts the most is the people’s mentality.

He added ,we often don’t care about these people’s feelings and emotions. We forget they too deserve their fair share of happiness and laughter.