The trio of Muzammil Sheikh, Nazibul Sheikh and Parizul Rahman from Abhayakhuti was convicted in the case on Wednesday . 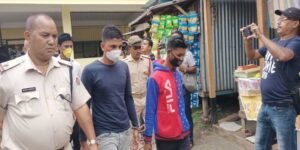 The police had arrested seven persons for their involvement in the case. The seven accused were identified as Muzammil Sheikh, Nazibul Sheikh, Farouk Rahman, Hanif Sheikh, Jahanur Islam, Md. Atab Ali and Sankarde Barman but Muzammil, Nazibul and Farizul were found to be the main accused.

The Special Court, Kokrajhar pronounced the judgement after completing all procedures of the incident after family members lodged an FIR in Kokrajhar police station, registered case no.440/2021 and subsequently police carried out thorough investigations into the rape and murder case of two minor girls.

The incident took place on June ,11 2021 which created sensation across the state .

Police had submitted the charge sheet during October last year and accordingly within nine months and two days, the  final judgement  of death sentence was pronounced .

On April 6,the Special Court, Kokrajhar had convicted the three prime accused who had perpetrated rape and later, brutally murdered the two teenagers whose bodies were found hanging from a tree in a nearby jungle.

After the incident, several bodies  including students union,  demanded a thorough investigation into the incident and punishment of the culprits.

The final judgement into the Abhayakhuti rape and murder case  was pronounced within nine months which is considered  to be one of the speediest verdict in the Indian legal system.

.Earlier , Parijul Rahman who has also been sentenced to death sustained injuries in police firing while attempting to flee from police custody.

CM Himanta Biswa Sarma was apprised of the court’s decision and said that he had ordered to form a Special Investigation Team (SIT) to ensure a speedy investigation in the case.

He tweeted, “Hon. Sessions Court, Kokrajhar awarded the death sentence to accused Muzamil, Najibul & Farizul in the gruesome case of rape & murder of two tribal minor girls. I visited the family on 13.6.21 and directed @lrbishnoiassam to form SIT and take the case to its logical conclusion.”

Reacting to his tweet, Kokrajahr IGP, LR Bishnoi, who headed the Special Investigation Team and had solved the case within 48 hours of the occurrence lauded the CM and Kokrajhar police to ensure proper and expeditious investigation.

Initially , the rapists tried to show the case as a suicide case and thus hanged the bodies of the girls from a tree. The Kokrajhar police had solved the case and confirmed the foul play.