Shillong ( Meghalaya), Nov 26 : Tension still prevails in the capital city with business establishments remaining closed after the mayhem on Thursday when for the first time in the history of the state , rioters attacked policemen and damaged their vehicles near Shillong Civil Hospital .

Majority of the business establishments remained closed for the third day in the city with additional Central forces keeping a strict vigil  on the developments . Two companies of CRPF and two companies of BSF have been deployed in the state  to maintain law and order . 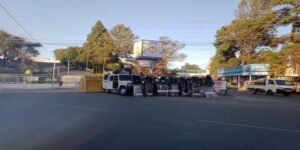 Plying of traffic between Meghalaya and Assam remained severely affected for the fifth day on Saturday with tourist cabs plying only  till Jorabat and Khanapara .

On Saturday ,The Hynniewtrep Integrated Territorial Organisation ( HITO) observed the Red Flag day at the premises of State Central Library In retaliation for the shooting by Assam Police which led to the death of five villagers including an Assam Police personnel at Mukhroh along Meghalaya – Assam border .

The protestors later submitted a memorandum to the Assam govt authorities in Assam House situated at Dhankheti here .

It may be recalled that on early hours of Tuesday 6 people including a forest guard were killed in a violence at a disputed area on the Assam Meghalaya border after a truck laden with timber was intercepted by forest guards of Assam .

Meghalaya has extended its  suspension of  mobile internet services in seven districts till Monday morning while Assam police sounded an alert in the border districts.