An Armed Branch Constable, Triplepearl Pasi of EJH District Executive Force (DEF) was also arrested for entering into a criminal conspiracy, for aiding and abetting the arrested drug peddler. 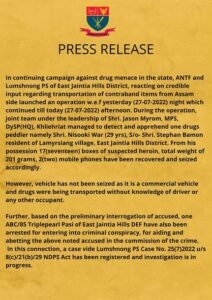 According to an official statement ,acting on a tip-off, a joint team of personnel from Anti Narcotic Task Force (ANTF) of Meghalaya Police in East Jaintia Hills (EJH) today arrested two persons – a drug peddler and a police constable – following recovery of 201 gms of contraband heroin carried in 17 boxes from the possession of the drug peddler who was travelling in a car .

Bob - A Tribute in Tears

Launch of Linking and Authentication of Electoral Rolls Data