The Nagaland NPP team at a press meet on Monday. 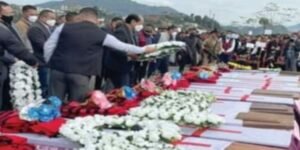 Dimapur (Nagaland), Dec 13: The National People’s Party (NPP) on Monday, Dec 13 has shared its horrific experiences while on their way to Oting village, Mon, to ascertain ground realities on the unfortunate Dec 4 incident where 14 innocent lives were lost.

At a press meet convened in its office located at Thahekhu Village, Dimapur, NPP Nagaland president,Andrew Ahoto, while narrating the account of the ordeal said all people need to respect and understandthe “truth and fact” where the SIT formed by the government of Nagaland is still under investigation but many “facts” which has been suppressed.

Stating that upon arrival at Oting village, the team were stopped at the check gate by uniformed personnel in entering the village, Ahoto said it was politically targeted on their team’s visit as according to him there were numerous vehicles plying up and down the same stretch.

Though the situation was not conducive, Ahoto narrated that the team had precisely sought for an explanation who had issued order (s) not to allow its team in entering the village but was denied the entry despite explaining that the visiting team were not there for any political motives but to meet the bereaved family members of the December 4 and 5 victims.

He also said that after long discussions, and with the intervention of some media persons who had reached the venue, allowed the team to proceed.

Mentioning that the team were allowed to proceed probably just because they had an argument, Ahoto also questioned on the “bias” being meted out to them as other political parties including the NDPP, BJP, and the RPP were allowed to enter the village while also some media persons were debarred except some “handpicked” allowed which is not applicable in a democratic country.

Saying that “no one can debar the Nagas from entering into its own territory” unless there is a volatile situation which cannot be controlled, Andrew Ahoto added that after much hiccups they were allowed the entry.
On the narrative where the union home minister, Amit Shah, during the parliament session had “twisted” the entire story, the State NPP chief also questioned that if the incident was of “mistaken identity”why were the security forces carrying old camouflage clothes and trying to dress the already dead people, why the bodies were being rolled in polythene bags and concealed.

He later supplemented that the entire scenario of the incident was “staged” as they (Army) were in possession of old camouflage clothes, guns and ammunitions and also some other old materials to make sure that the victims were killed in an “encounter” which is very common in the entire northeastern region.

He also said it could be probably for derailment of the Naga peace talks which is going on.

“The massacre which has been done is inhumane which was planned”, said Ahoto while also adding that a very strong action has to be taken against the perpetrators.

Condemning non responsive of the DC and SP, Mon, on the day of the incident, Ahoto said had the DC and SP taken quick response, the unfortunate incidents could have been averted.

He later added that the controversial AFPSA should be totally removed not only from Nagaland but from the entire region in order to bring justice to the people.

NPP Nagaland asks for ‘capital punishment’ of all Jawans involved in Oting incident Seeks suspension of Deputy Commissioner and Superintendant of Police Mon.

The NPP Nagaland on Monday has demanded for “capital punishment” to those security personnel involved in the December 4 Oting incident.

Speaking at the NPP Nagaland called press meeting at its office, general secretary (IPR and Media),Tohovi Achumi, demanded that they (Jawans) should be tried as any criminal in civilian court, centre Government to sanction their prosecution immediately, suspension of Deputy Commissioner and Superintendent of Police, Mon, for their negligence.

Further, urging the NPMHR to take the matter seriously, Tohovi also said the NPP has demanded for repealing the AFSPA while the action taken copy must be given to all the victim’s families.

Stating that security forces has been misusing the most controversial AFPSA which is not new in northeast especially in Assam, Nagaland, Manipur, some parts in Arunachal Pradesh, and though different in Jammu and Kashmir, general secretary (Political Affairs), NPP Nagaland, Ricky Ozukum shared tha tunder the Act the security forces have committed hundreds of “extra judicial” killings in the northeast.

He said that the security forces have burnt down hundreds of villages, used the Act to commit sexual crimes against the women in the region which has gone unnoticed in rest of the world.

Ricky later stated that many PILs have been filed against the Act and there are many commissions in the country recommending the government of India to repeal the Act.

Stating that the government of India turns a “blind eye” and many killings still continues which could be stopped only when the AFSPA is repealed, NPP Nagaland general secretary (Organization), Lima Longkumer, also supplemented that many PILs were filed against the Act and the Supreme Court has already given many rulings and recommendations to the government of India.

Citing an example of July 8, 2016, where the Supreme Court’s ruling states that anybody be it an army personnel of any rank would not have the immunity under the Act for “unjustified killings” of innocent people or civilians, using the power to carry sexual offence and others, Lima added that whoever the personnel were involved in the crime should be tried in the civilian court.

Lamenting that till date no not a single court marshal paper has been out in public domain where not even a single jawan or officers committing a crime under the AFSPA have been prosecuted but being protected, Lima Longkumer, also mentioned that the NPP condemned on the recent statement made by the Central government which was misleading thereby conveying a message more like an attempt to “shelter” the culprits.

Stating that the sequence of the massacre has proved that the intention of the security forces were to implicate the innocent people as militants killed in an “encounter” for their own benefits, the NPP Nagaland general secretary (Organization) therefore urged upon that the jawans and army officers involved should be prosecuted as per the guidelines and the ruling given by the Supreme Court.

CM Conrad lays base for Inspection & Certification Centre at Shillong