MGMP Calendar and Schedules for Shillong (Street and Cafe), Tura, Sohra and Jowai 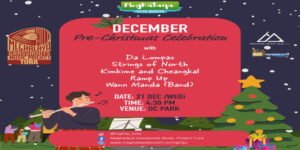 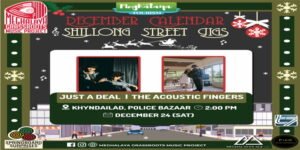 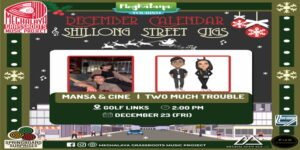 23rd December Street Performance
Venue: Golf Links
Artist: (1) Mansa & Cine
Bio: They have been talking about music for a long time and about doing a performance but never really got a chance except singing and playing at church. They’ll be playing some popular indie and pop songs added with a little spice of oldies
Artist: (2) Two Much Trouble
Bio: Two friends covering a few of their favourite songs.

23rd December Cafe Performance
Venue: Cloud 9 Resto Lounge
Artist: Ahaia the band
Bio: AHAIA is a band formed in the year 2021. They have been performing in various platforms and music events, exploring various genres of music but mainly focusing on Hard rock, Reggae, Country and Opera.

24th December Street Performance
Venue: Police Bazaar
Artist: (1) Just A Deal
Bio: Just A Deal ‘ is a modern pop band based in Shillong who have released a dozen of singles since their first existence as a band from 2018. They also pursue their dreams as solo artists and has release few of their works on various music platforms known by their names Sam Zeth, singer-songwriter and Elviz, a mix genre music producer. Working on a new project ‘5am’,they are looking forward to more success and achievements in the near future.
Artist: (2) The Acoustic Fingers
Wanbor and Abigail from Mawlai known as The Acoustic Fingers have played a few shows, parties and love to perform. “Music Is A Gift From God that’ Touches Souls”