The landslide triggered by incessant rainfall has brought traffic movement to a standstill at Narpuh and Sonapur on Thursday morning.

The police informed that traffic has been disrupted in the route and clearing is in progress.

According to sources , vehicles parked at the road have been stuck after being hit by the landslide.

Talking to twitter, the East Jaintia Hills Police said, “Due to the unrelenting heavy downpour, some parts of the road on NH06 under Lumshnong Police Station has been badly damaged, & Heavy Motor Vehicles would be unable to pass.”

A landslide had also occurred at the Darrang – Shnongpdeng road. Tourists visiting Shnongpdeng have been advised to be cautious until the weather condition improves.

Due to the continuous heavy down pour, some parts of the NH06 under Lumshnong Police Station is witnessing minor flash floods . We request travels to avoid taking this route tonight if possible.@MeghalayaPolice@CMO_Meghalaya @lrbishnoiips pic.twitter.com/wUQMprzLtr 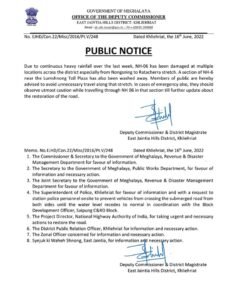 Meanwhile , DC , East Jaintia Hills, said that some parts of the road on NH06 under next Lumshnong Toll Plaza has been partially washed away. Heavy Motor Vehicles (Trucks, Buses) would be unable to pass. Concerned departments have been directed to take restorative measures.

Four children killed in Laitlarem due to landslide

Schools to remain closed till June 20 due to heavy downpour