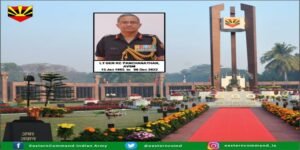 He was from the Madras Engineering Group (Madras Sappers).

According to sources , Lt Gen Panchanathan complained on uneasiness after a meeting here and was immediately rushed to North Eastern Indira Gandhi Regional Institute of Health & Medical Sciences( NEIGHRIMS) , here .

His daughter who is out of the country is expected to reach here on Thursday morning .

He last rites would be performed at Assam Regimental Centre Crematorium in Happy Valley on Thursday .

Meghalaya Chief Minister Conrad Sangma has  condoled the the death of the Defence officer.

The very jovial & energetic Lt. Gen. K C Panchanathan, GOC 101 Area left for his heavenly abode last night. Deeply saddened by his untimely demise. He would often visit me with suggestions on how @easterncomd can strengthen their relationship with the people of the NE@adgpi pic.twitter.com/yGArzVhmtT