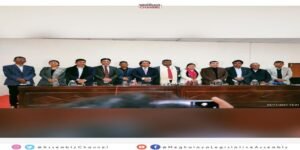 This was disclosed to the media by Dr. Sangma at a Press Conference held at Hotel Pinewood here .

Dr. Sangma said the joining of Congress MLAs with All India Trinamool Congress is to bring faster development in the state.

The former CM blamed the Congress as they failed to perform their duty as the main opposition party across the country. Briefing media persons, the former CM said that after much consideration the decision to join Mamata Banerjee-led TMC was taken.

The MLAs have submitted a letter in this regard to Assembly Speaker Metbah Lyngdoh yesterday. Along with Dr Mukul Sangma, those who have joined TMC from the Garo Hills region are Zenith M Sangma, Dikkanchi D Shira, Miani D Shira and others. Whereas from the Khasi-Jaintia Hills region, those who quit the Congress include Charles Pyngrope, George B Lyngdoh, Himalaya Shangpliang and Shitlang Pale.

The Congress MLAs joining the All India Trinamool Congress became imminent when the Shillong Lok Sabha member, V Pala  was appointed  as the  President of Meghalaya Pradesh Congress Committee.

However, Congress leaders in the state said that the Meghalaya Congress will not succumb to pressure in the wake of the twelve members of the party joining the Trinamool Congress.

16 days of ‘Activism against gender-based violence’ launched in Kohima

NSF dismay over arrest & detention of student leaders in Manipur